Over the past 10 years, Earth's average temperature has risen by 0.36°C.7 At this rate, global warming will surpass the +1.5°C limit set by the Paris Climate Agreement by 2035.

What is global warming?

Global warming is the trend of Earth's temperature rising at an unprecedented rate starting in the mid 20th century.4

Though gradual changes to Earth's climate have happened in the past, this latest trend has been primarily caused by the release of carbon dioxide (CO2) into the atmosphere by burning fossil fuels.4 CO2 is a greenhouse gas, meaning it traps heat in Earth's atmosphere rather than allowing it to radiate into space.4

Since the mid 1950s, Earth's temperature has had a clear positive trend (see fig. 1).

The amount Earth has warmed is measured against the average pre-industrial global temperature. As of 2020, Earth's temperature is approximately 1.01°C above pre-industrial levels.7 If the planet's temperature continues to rise, we can expect many environmental and societal impacts, the most significant of which we will explain in this paper.

In late 2015, 184 nations were party to the Paris Climate Accord, a UN agreement dealing with reducing greenhouse gas emissions in an effort to mitigate global warming. The stated goal of the agreement is to limit the average global temperature to 1.5°C above pre-industrial levels.1

In 2018, the UN released a report detailing the potential impacts of human-induced climate change and possible preventative measures. Its key finding was that staying below the 1.5°C target is possible, but would require "rapid, far-reaching, and unprecedented changes in all aspects of society".2 Human carbon emissions would need to decrease by 45% from 2010 levels by 2030, and reach net zero by 2050.1

The primary cause of global warming is the human emission of CO2 into the atmosphere. ThisCO2 is produced by burning fossil fuels, mostly from electricity production, agriculture, industry, and vehicles with internal combustion engines.8 As of 2020, the atmosphere's carbon concentration is 411ppm (see fig. 2).5

Since CO2 abundance in the atmosphere is directly linked to the Earth's temperature increase, limiting atmospheric carbon has been identified as vital to mitigating global warming. As part of the Kyoto Protocol climate convention, scientists have 450ppm as a good upper limit for carbon concentration in order to keep global warming below +2°C.

Global warming will impact a wide range of issues including health, livelihoods, food security, water supply, human security, and economic growth.1 The severity of these impacts is determined by how hot Earth gets; reaching 2°C above the pre-industrial average would put millions more people at risk than if global warming was limited to 1.5°C.1 Generally speaking,"countries in the tropics and Southern Hemisphere subtropics are projected to experience the largest impacts on economic growth."1

The UN projects more frequent weather extremes (both heavy rain and drought) and temperature extremes due to global warming.1 The most immediate risk to the environment is the dying-off of coral reefs- a process that has already started on a large scale (see fig. 3). 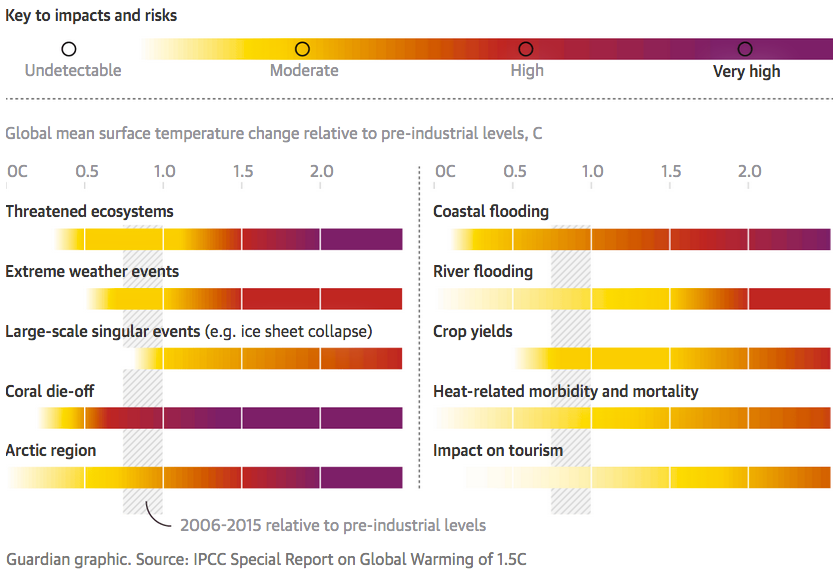 The changing climate is likely to increase the prevalence of disease. Global increases in temperature are estimated to alter the distribution of insects that are known vectors for pathogens, such as mosquitos.10 Studies in China show that increasing temperatures positively affect the viability of disease transfer by decreasing the viral incubation time in vectors -- leading to increased infection rates.11The World Health Organization estimated that climate change has been responsible for 3% of diarrhoea, 3% of malaria, and 3.8% of dengue fever deaths worldwide in 2004. Total attributable mortality was about 0.2% of deaths in 2004; of these, 85% were child deaths.13

Global biodiversity comes under major threat from climate change as changing environments increase extinction pressure on species. A review in 2013 reveals that changing environments may lead to the extinction of thousands of species within the next 100 years. The proximate causes of such extinctions include biotic and abiotic factors, such as limited physiological tolerance to high temperatures and changing species interactions.14

As the threat to biodiversity looms, so does the increase of zoonotic disease across the globe. A greater biodiversity gives pathogens less room to dominate and spread, and as humans exploit and degrade these vital ecosystems, conditions become more favorable to these hosts, vectors, and pathogens.15 With the rise of COVID-19 and its effects being heavily felt world-wide, it is unmistakably clear that the spread of these zoonotic diseases is a major outcome of our overexploitation of natural resources and vital habitats. As demand for meat and land increase, massive deforestation has significantly raised human contact with wild animals and their body fluids which may be vectors for pathogens.16

Other already-visible impacts of global warming include worldwide glacier and sea ice melting, which contributes to sea level rise.9 However, thermal expansion is a larger component in this, contributing 70-75% of sea level rise.12 Some regions have experienced severe drought, leading to food-and-water shortages as well as wildfires.9